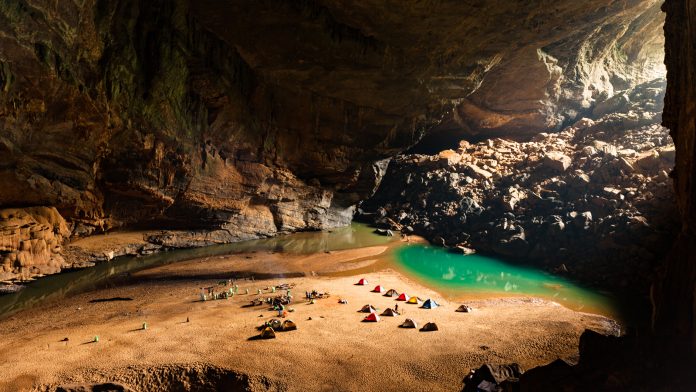 Vietnam is a tropical country in Asia, where attracts a numerous both domestic and foreign tourist by the generous natural and unique architecture, culture, and impressive cuisine,… Especially, Vietnam is known for the famous caves system, gather the largest caves in the world. I will introduce the most 5 beautiful caves in Vietnam in this post.

Son Doong Cave is located in Quang Binh province and is the largest natural cave in the world. The cave is a part of an underground system connecting mỏe than 150 other caves in Vietnam located near the border with Laos.

Ho Khanh is a local person who detected the cave. In 1990, during the usual trip to the forest, Ho Khanh accidentally discovers a small gate cave peeking behind a cliff. When he approached the gate, he saw thick clouds of fog blowing out from the small cave entrance and heard the sound of a swift stream coming out of the cave. Then he left with the thinking of this cave as another normal cave and forgot it. At the same time, Howard Limbert and Deb – members of the Royal British Cave Association (BCRA) were in Phong Nha to conducted caves searches in this area but were still unable to find the exact location of Son Doong Cave. In 2009, Ho Khanh and a professional from BCRA finally found the way to gate cave, it was an extremely hard and long journey due to the cave is located deep in the jungle with quite a dangerous terrain, far from the main road and can not be found on Google Earth. Son Doong is named by Ho Khanh – who the first person detected it.

The largest cave in the world

After finding and discovering Son Doong cave, the BCRA made the wold shocked.  Finding the case is like finding the Everest underground. Many major overseas newspapers such as Daily Mail, Telegraph, The Sun, Breitbart, Newser…simultaneously uploaded to Son Doong cave.

According to the analysis of sedimentary fossil determines that the Son Doong cave formed relative young – about 3 million years old.

The length of the cave is nearly 9km, in some locations, the hight is up to 200m, the width is 160m. It big enough to contain New York with the 40 story bock skyscraper. This cave has a beautiful stalactite system with the images of the “garden of Eden” within the diverse ecosystems, cave or the “ pearls” collection of thousands of years old, the stream, waterfall in the cave.

The discovery and publication of Son Doong cave that has to turn the Phong Nha – Ke Bang cave area becomes the kingdom famous cave in the world. To completely discover Son Doong cave will take about 4 days and have to register in advance.

Tam Coc – Bich Dong is also known as “ Halong Bay on land”, it is one of the key tourism areas of Vietnam. Trang An – Tam Coc complex has been voted a world heritage by UNESCO with a system of limestone caves and historical relics related to the Vu Lam palace of the Tran dynasty.

Trang An complex includes 50 dry caves and 50 flooded which are diverse in morphology and types. Visitors will discover Tam Coc – Bich Dong by boat. The boat takes tourists on the Ngo Dong river winding through the cliffs, water caves, rice fields. It will take around 2 hours, especially, tourist have the opportunity to admire the scenery sites of Ngo Dong river that can be changed according to the rice season: green rice, yellow rice, or silver color of the water in the field.

Sung Sot is listed as one of the most beautiful caves in Vietnam. This cave is recognized by the French in 1901. This cave was named ‘ Surprising Cave” because he was surprising about the beauty of the cave. The cave includes a lot of rock system that you will not find in another place. The way to enter Sung Sot cave under the canopy, the rocky steps, visitors bother to have the beast of the climber and the eagerness as if they are going to the sky.

Inside the Sung Sot cave

Furthermore, the cave is divided into 2 main areas. The first area is created by the unique stalactite shone brightly. In the second area, tourists will immerse another scene with the banyan tree, clear lake, charming landscape, and all kinds of trees and many species of birds live, monkeys go down here to find the fruit.

Thien Cung cave is located in the West of Ha Long Bay, Thien Cung as the paradise underground. Today, the most remaining archaeological remains are at the cave entrance and the ground. It is Melania snail shell sediment ( freshwater snail) that have been white by Carbon. Furthermore, scientists also found historical discoveries from the Stone Age as a stone tool in the cave, javelin that prehistoric people used to hunt animals or for self purposes protection.

Mua cave ( Dance Cave) has the geological and geomorphologic characteristics typical of limestone mountains from millions of years ago. Especially, the highlight of the Hang Mua tourist area is the beautiful scenery on the road leading to the top of Mua Mountain, built in imitation of the architecture of the Great Wall of China with almost 500 stone steps. From the top of the mountain, visitors can admire the whole beauty of the Tam Coc area with immense green rice fields.

If you’ve never been to Vietnam before, I kindly provide some helpful tips to make your trip easier.

Prepare your passport in advance, and make sure that your passport has at least 6 months validity, with left space for visa stamping

5 Reasons Why Visit UAE This Summer

Make Australia Your Next Holiday Destination

Can A Betting Calculator Help You Pick A Kentucky Derby Winner?

How to Sell Your Glass Artworks?