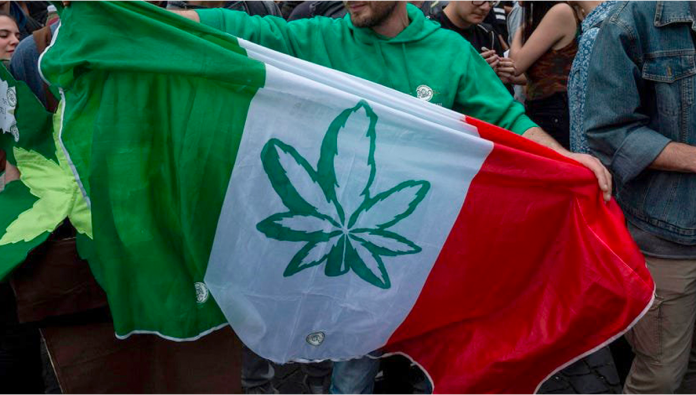 It looks like it’s time for the Italian government to seriously start discussing the legalization of marijuana. Why? Well because more than hundreds of thousands of italian citizens have expressed their longing for the decriminalization of cannabis through a ballot campaign that would stop penalizing the cultivation and possession of cannabis.

Such ballot campaign towards cannabis decriminalization resulted in more than 500.000 verified electronic signatures in just one week, which definitely was surprising news. Now, this success is also strongly linked to the fact that the ballot system was only recently ago digitalized, just weeks before the beginning of the campaign. Before this new system was implemented,  when a ballot was carried through, italian citizens had to attend the signature of petitions personally, which, in the digital days we’re living in, wasn’t too up to date. Besides, in the context of coronavirus, it was about time to update this process. With the new system, gathering signatures saves time and money, proponents no longer need procedure time to request authorizations and organize different signing centers along the countries for citizens to attend to.

Returning to our initial topic, cannabis decriminalization, the future is looking quite bright for Italy. This is because, in line with the italian law, when an amount of 500.000 signatures in favor of a certain proposal is achieved, this means that proponents are allowed to continue with the ballot campaign towards making this effective. Now, this doesn’t imply that marijuana is bound to be legalized in Italy, and again, just yet, but it does mean that it would make the lives of more than six million Italians who are marijuana users much, much easier.

And although the signatures were collected already two weeks ago, before september 30th, some bureaucratic issues are taking place, and it’s most likely linked to the heads’ ideologies.

It’s quite a big net to untangle but in short words, some required procedures were requested by the proponents of the ballot campaign to decriminalize marijuana in Italy, but according to the project coordinator of Meglio Legale, the campaign for cannabis legalization, explained that their wishes weren’t fairly commanded, as they normally are with other subjects.

This is no surprise however, after noting that cannabis decriminalization is definitely no priority in the country, according to Matteo Salvini, the right-wing League leader who claims that “Drugs are always drugs,” and that “drugs are death”.

And on the counter side, Enrico Letta, the left-wing democratic party’s leader has not even expressed a word on marijuana’s campaign, which in result has disappointed half of his voters. Meanwhile, Giuseppe Conte, Italy’s former Prime Minister and the new leader of the Five Star Movement party said he hasn’t voted for the cannabis campaign, while the party’s founder Beppe Grillo has made public his support for the initiative.

In conclusion, it sounds like there needs some debating to do in the Italian territory in concerns of marijuana and its decriminalization. The country being known for its history in the catholic religion, and with many of their old representatives and ideologies still standing, it may still be a long run until cannabis consumers can happily (and stress-free-ly) purchase their own marijuana seeds, grow, harvest and consume their own cannabis, without the fear of facing problems with the authorities.

Perhaps the thing that would really help the situation would be for those against this decriminalization to try to step into those in favor’s shoes, and try to understand why this is so important to happen. Not only the decriminalization, and legalization too, of cannabis would signify a better access for consumers to products derived from the plant, but it would also represent a huge boost in the industry and Italian economy. And this is no white promise either, Italy wouldn’t be the first country to take such an initiative, and just by looking at other countries for examples we can see that no negative outcomes have resulted in the legalization of the plant.

Besides, just because marijuana becomes decriminalized, it doesn’t mean more people are going to consume it, it just means that those who actually do regardless, will be able to do so more freely. And if there’s something that governments should stand for is the people, and 500.000 signs in favor sounds like the people are in favor of cannabis decriminalization, so I guess it’s time to listen.

YouTube to MP4 Converter: A Simple Free Tool in 2023

What To Include in The Checklist for Plant Movement?

What to look for when choosing a kid’s wardrobe?

What is the DAO NFT? (Explained)

Reviewing the Best Non-GamStop Casino Sites in the UK