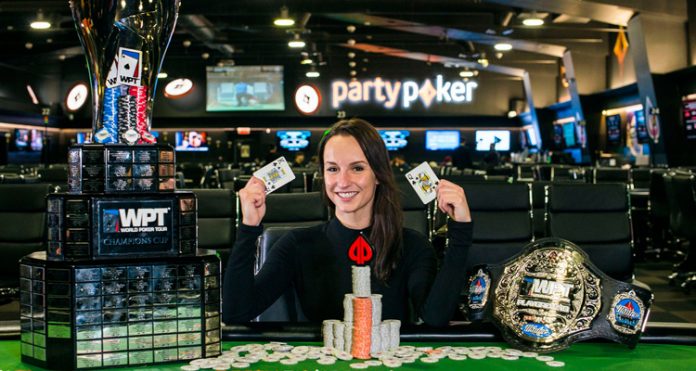 Ema Zajmovic is World Poker Tour(WPT) winner in the main event in 2017 and not only this she is the first women player to win this title. Ema Zajmovic is basically from Canada and she started playing poker at a young age and now the world is recognizing her as a poker player who won different tournaments with different categories.

Ema Zajmovic was born in Yugoslavia on 7 April 1990. When she was only 6 years old, the situation in her home country was unpleasant, and a series of conflicts occurred like ethnic conflicts, a war of independence. These conflicts changed into total war and caused many casualties, and these things made her parents flee to Canada and start a new life there.

But starting a new journey in life was easy for her parents, which affected Ema Zajmovic’s life. As she was new in Canada, there was a language barrier to understanding things properly. Still, she and her family overcame these barriers and struggled to make life more beautiful, forget the trauma of wars, and leave their home country.

Ema Zajmovic was a good student during school, and she was active in the sports too; due to her interest in sports, she usually spent time with her male friends and learned poker that time. At school, playing poker was just for spending a good time with friends .she did not decide on her career as a poker player.

Ema Zajmovic wanted to be a lawyer, as situations changed in her life, she changed her mind too. She got a degree in public relations and then a master’s degree in political communication at the University of Lava.

She used to play poker during school with friends, but it was not like playing in different tournaments. She started playing poker at the age of 19. At that time, she was dating a poker player, but the interesting thing is she left her boyfriend behind, who introduced her to this game.

First, Ema Zajmovic played cash games for fun, but gradually transformations occurred, and she turned into the first women player to win the WPT. The first time she was successful to play poker in any series was in 2016, named as world poker series in LasVegas, and the same year as qualified for the Main Event of the World Poker Tour on Kahnawake.

But 2017 was the moment of the year for her; she won WPT(World Poker Tour). With this success, she got the title of the first woman to win the WPT. She did not stop here. She played in Amsterdam and reserved the second position. She broke different records and won different awards. We are going to mention it below.

When it comes to Ema Zajmovic, we will go from the start to the total earnings of Ema Zajmovic. In 2016 she played in the world poker series and won $ 15,000.

Ema Zajmovic is the most beautiful poker player; she started playing at a young age. Ema Zajmovic height is about 5.6 feet in height and is a slim fit with brown _dark eyes and the brown _ colour of her hair. Always smiling at her face intensifies her beauty. The zodiac sign of Ema Zajmovic is Aries.

We have to know about her past relationships before deciding on Ema Zajmovic’s dating history. Ema Zajmovic was introduced to poker by her boyfriend, and then she played matches of he career. But the current relationship status of Ema Zajmovic is single.

Ema Zajmovic spent her time on Instagram posting 268 posts on her official account and currently is following 429. Her follower’s list on Instagram has shot 163 due to two reasons. First, her account is private, and it isn’t easy to find her on Instagram because it’s with another name, but we managed to search for her for you all.

We also researched her Twitter account and found that she joined Twitter in May 2012. She mostly connected with friends and other people who wanted to reach her by Twitter. Currently, she is following 536 and followers of her are 1158

Some facts about Ema Zajmovic

We started from her initial phase of life, and it was such a difficult time for her family to leave her home country because crises were created due to war, and it was not easy for her parents to survive. And then, we touched on her school life, college and university and finally reached Ema Zajmovic as a poker player.

How easy is it to find no deposit bonus offers at casinos?

The Way UK Gamblers Can Control Their Gambling Habits

How to Buy Virtual Land in the Metaverse

What are the different types of digital marketing?

4 Tips To Become a Best Writer – Improve Your Writing...