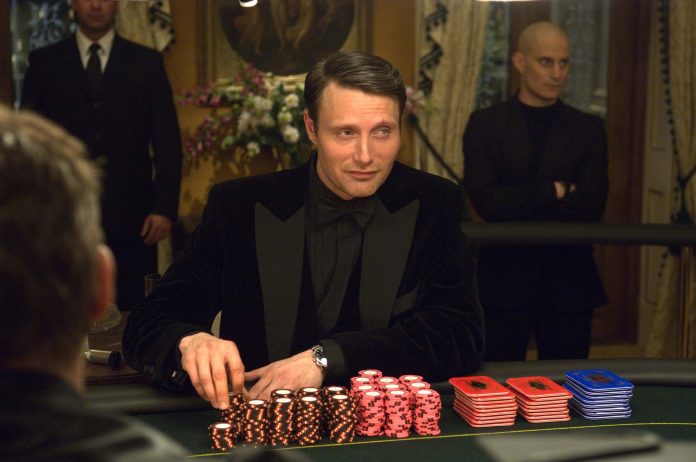 Lucky gambling scenarios happen in real life all the time. Sadly, we witness them very rarely. Films, however, offer us opportunities to see such lucky stories or even something completely impossible in real life.

The success of the gambling motion picture depends on the director’s understanding of the game. Poker became one of the most beloved activities to film around. So, the researchers from the Win Win Casino software development company have prepared a list of the top 5 films over the last century.

The plot tells another incredible adventure of agent 007. James Bond is ordered to hunt down dangerous terrorist Le Chiffre. According to the CIA intel, he intends to play big in the Montenegrin casino.

Daniel Craig’s character joins a high-stakes Texas hold ’em tournament to get closer to the target. The film keeps the audience at the edge of their seats due to the huge sums and James’ life at stake.

Poker and money are a win-win combination for people who love risk. Earning on gambling is the dream pursued by thousands of players: it is easy, enjoyable and profitable. The film Rounders demonstrates the other side of this life.

Law student Mike skillfully combines education with a poker hobby. Eventually, it brings him to the same table with Teddy who is a crime boss called KGB. Luck is not on Mike’s side this time, and he loses everything. Well, he should have invested his money into a turnkey casino to earn a high passive income, instead.

While being under the influence of a huge loss, Mike meets an old friend of his, Lester, who is released from prison. The two come across due to serious troubles, and the only way out is to start playing again. Now the stakes are getting unrealistically high because of money and guys’ lives.

Young Eric The Kid Stoner is the best stud player in New Orleans. He hears about the arrival of famous Lancey The Man Howard in the town — the legendary gambler.  The Kid decides to compete with him to prove he is better and win serious money. He manages to arrange a meeting. The bets are made, and the game begins.

The film is rightfully considered an eternal poker classic, with a few interesting facts worth mentioning:

This western adventure tells the story of a professional gambler, a cunning swindler, and a handsome man named Bret Maverick. The hero of Mel Gibson participates in a poker tournament with big stakes. However, an initial deposit of 25 thousand dollars is required.

Bret begins collecting the money he lacks, visiting debtors. However, the charming swindler Annabelle appears on his way. The woman also plans to participate in the tournament and looks for the necessary amount by all means.

The protagonist goes through a difficult path of gathering the initial deposit for the tournament. That is where the most interesting part of the film begins as the winnings are yet to be found and lives are to be preserved.

All In: The Poker Movie

Documentaries about gambling are also highly popular. The 2009 film contains interviews of many well-known professionals, poker-related people, and even politicians. Dozens of interesting characters describe the intricacies and features of the most beloved card game ever.

The motion picture focuses on the history of poker, its origin in the USA, its popularity increase, the beginning of the online entertainment era, and more. The film also raises questions about the usage of bluffs, player reading, mathematics, and psychology.

The desire to recreate characters’ actions in films is common for watchers. However, other than playing poker like people on the screen, it is possible to offer others to participate in it.

The opportunity to launch a gambling site with diverse card entertainment is more than real today. The aggregator Win&Win Casino offers a turnkey elaboration of a portal, supported by experts in the sphere.

All In The Poker Movie IMDb RATING

Is It Safe To Play At Offshore BTC Casinos?

Tips on How to Use Online Casino Bonuses to Your Advantage

Why Do Companies Offer Consumers Deals?